Word forms: plural, 3rd person singular present tense complements, present participle complementing , past tense, past participle complemented pronunciation note:   The verb is pronounced (kɒmplɪment ). The noun is pronounced (kɒmplɪmənt ).
1. verb
If one thing complements another, it goes well with the other thing and makes its good qualities more noticeable.
Nutmeg, parsley and cider all complement the flavour of these beans well.
Synonyms: enhance, complete, improve, boost   More Synonyms of complement
2. verb
If people or things complement each other, they are different or do something different, which makes them a good combination.
There will be a written examination to complement the practical test.
We complement one another perfectly.
3. countable noun [usually singular]
Something that is a complement to something else complements it.
The green wallpaper is the perfect complement to the old pine of the dresser.
Political knowledge is a necessary complement to science in this situation.
Synonyms: accompaniment, companion, accessory, completion   More Synonyms of complement
4. countable noun [usually singular]
The complement of things or people that something has is the number of things or people that it normally has, which enable it to function properly.
[formal]
Each ship had a complement of around a dozen officers and 250 men.
Not one house on the Close still had its full complement of windows.
Synonyms: total, capacity, quota, aggregate   More Synonyms of complement
5. countable noun
In grammar, the complement of a link verb is an adjective group or noun group which comes after the verb and describes or identifies the subject. For example, in the sentence 'They felt very tired', 'very tired' is the complement. In 'They were students', 'students' is the complement.
COBUILD Advanced English Dictionary. Copyright © HarperCollins Publishers 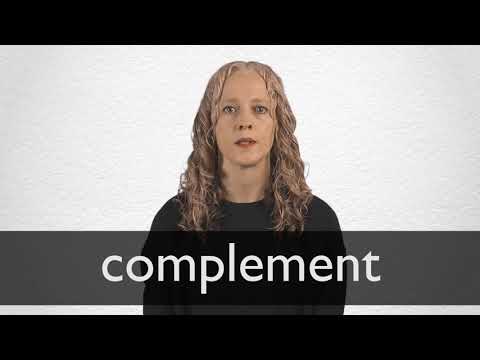 Word of the day:
'tenno'

noun (ˈkɒmplɪmənt )
1.
a person or thing that completes something
2.
one of two parts that make up a whole or complete each other
3.
a complete amount, number, etc (often in the phrase full complement)
4.
the officers and crew needed to man a ship
5.  grammar
a.
a noun phrase that follows a copula or similar verb, as for example an idiot in the sentence He is an idiot
b.
a clause that serves as the subject or direct object of a verb or the direct object of a preposition, as for example that he would be early in the sentence I hoped that he would be early
6.  mathematics
the angle that, when added to a specified angle, produces a right angle
7.  logic, mathematics
the class of all things, or of all members of a given universe of discourse, that are not members of a given set
8.  music
the inverted form of an interval that, when added to the interval, completes the octave
the sixth is the complement of the third
9.  immunology
a group of proteins in the blood serum that, when activated by antibodies, causes destruction of alien cells, such as bacteria
verb (ˈkɒmplɪˌmɛnt )
10. (transitive)
to add to, make complete, or form a complement to
▶ USAGE Avoid confusion with compliment
Collins English Dictionary. Copyright © HarperCollins Publishers
Word origin
C14: from Latin complēmentum, from complēre to fill up, from com- (intensive) + plēre to fill
Word Frequency

(ˈkɑmpləmənt ; for v .; ˈkɑmpləˌmɛnt )
noun
1.
that which completes or brings to perfection
2.
the amount or number needed to fill or complete
3.
a complete set; entirety
4.
something added to complete a whole; either of two parts that complete each other
5.  Grammar
a word or group of words that, with the verb, completes the meaning and syntactic structure of the predicate ( Ex.: foreman in “make him foreman,” paid in “he expects to get paid”)
6.  Immunology
a complex series of proteins in the blood plasma that acts with specific antibodies to destroy corresponding antigens, as bacteria or foreign proteins
7.  Ancient Mathematics
a.
the number of degrees that must be added to a given angle or arc to make it equal 90 degrees
b.
the subset which must be added to any given subset to yield the original set
8.  Music
the difference between a given interval and the complete octave
9.  Nautical
all of a ship's personnel, including the officers, required to operate a ship
verb transitive
10.
to make complete; be a complement to
Webster’s New World College Dictionary, 4th Edition. Copyright © 2010 by Houghton Mifflin Harcourt. All rights reserved.
Word origin
ME < L complementum, that which fills up or completes < complere: see complete

Examples of 'complement' in a sentence
complement

In other languages
complement


Translate your text for free

Nearby words of
complement

Definition of complement from the Collins English Dictionary
New from Collins

anxious for or anxious that?

Drag the correct answer into the box.
capable
able
He's   of loyalty.

Which version is correct?
It's not almost as nice. It's not nearly as nice.

Drag the correct answer into the box.
frightened
afraid
All I could see was a very   dog.
Your score:
Word of the day
tenno
the formal title of the Japanese emperor , esp when regarded as a divine religious leader
SEE FULL DEFINITION
SEE PREVIOUS WORDS
Latest Word Submissions
zoomer (Gen Z) Feb 14, 2020
neopronoun Feb 14, 2020
LGTM Feb 14, 2020
hero (modifier) Feb 14, 2020
View More Submit
Are Brexiety and flextensions finally behind us?
We look back on the words that emerged out of the long-running Brexit saga and wonder if we will have any further use for them. Read more
The evolution of English
Last month saw the publication of the new fourth edition of the Collins COBUILD English Usage, an in-depth guide to modern and authentic English. To celebrate this event, we thought we’d look at some of the ways in which English usage is evolving in today’s world. Read more
Collins English Dictionary Apps
Download our English Dictionary apps - available for both iOS and Android. Read more
Collins Dictionaries for Schools
Our new online dictionaries for schools provide a safe and appropriate environment for children. And best of all it's ad free, so sign up now and start using at home or in the classroom. Read more
Word lists
We have almost 200 lists of words from topics as varied as types of butterflies, jackets, currencies, vegetables and knots! Amaze your friends with your new-found knowledge! Read more
Learning English: Making suggestions when travelling
Take a boat? Stay overnight somewhere? This article looks at some useful phrases you can use when discussing options about what to do when travelling. Read more
13th edition of the Collins Dictionary out now!
Updated with all the very latest new words and senses, this new 13th edition is an unparalleled resource for word lovers, word gamers, and word geeks everywhere. #homeoflivingenglish Read more
New collocations added to dictionary
Collocations are words that are often used together and are brilliant at providing natural sounding language for your speech and writing. Read more
Join the Collins community
All the latest wordy news, linguistic insights, offers and competitions every month. Read more
Unlock language with the Paul Noble method
No books. No rote memorization. No chance of failure. Your chance to have a one-to-one lesson with best-selling language expert Paul Noble, try a FREE audio sample of his brand new Mandarin Chinese course. Read more
Scrabble score
for 'complement':
18

Drag the correct answer into the box.
mourning
morning
Anger is part of the   process.

Which version is correct?
She fixed her pale blew eyes on her father's. She fixed her pale blue eyes on her father's.
Your score:
What is #love anyway?
Every year on the fourteenth of February the world celebrates the idea of love. If you look up ‘love’ in Collins English Dictionary, you will find the word defined as ‘an intense emotion of affection, warmth, fondness, and regard towards a person or thing’. But love also appears in numerous other guises in the dictionary. #CollinsDictionary #blog #valentines February 14, 2020 Read more
Create an account and sign in to access this FREE content
Register now or log in to access
扫雷红包群群规大全 私人扫雷群二维码 最新扫雷群二维码-免押 微信红包二维码扫雷群 3-10元扫雷群二维码